The Hough Riots of 1966 was a six day event (July 18-23) that occurred due to a national pattern of high racial tension and frustration between Whites and African Americans. The high rates of tension produced violence throughout the country and the outcomes were similar to the Hough Riots. At the 79’ers Café on Hough Avenue an African American customer asked for a glass of water and the owner refused to do so. The owner then proceeded to post a sign in the window indicating “No water for Niggers". This particular dispute is what sparked the riots on July 18th, 2017 starting from a rock being thrown in the window leading to looting, arson, and shooting. It escalated so quickly that even the police were unable to diffuse the situation.

On July 20th, the National Guard was requested to move into Hough by Mayor Ralph Locher, with intentions of diffusion and restoration. It took a few days for things to die down due to the fact that a large fire broke out at Cedar and East 106 Street on the 21st of July. By the next week (7/25) things began to die down and so did the neighborhood a little since then. There was no evidence that the riot was planned. records indicate that during these riots 4 people were killed, 30were injured and 300 were reported arrested. The racial tension between Whites and African Americans was a widespread throughput the country in the sixties.

New Culture Ideals, Chinese Women, and the May 4th Incident

The May 4th Incident of 1919 can be viewed as a culmination of enthusiasm for the ideals presented in the New Culture Movement, discontent with the fractured nature of Chinese governance, and the unique geopolitical context in the aftermath of the first world war1. The protest itself was initiated by over 3000 Beijing students upset with the terms provided to the Chinese delegation at the Versailles conference, who then took to the streets for a protest that eventually ended with the burning of several government offices and numerous arrests2. In the eyes of many Chinese, these students had simply been acting on a discontent that permeated throughout China in the 1910's, and in this context, strikes and protests spread throughout China in solidarity with the student's actions. The importance of the May 4th incident can be analyzed by a look at the values of the New Culture Movement which inspired many of the student protestors, which included a critique of the gender order in China3.

This exhibit analyzes what happened on Bloody Sunday, and it investigates the impact of this day on the Troubles in Northern Ireland, 1968-1998. After this day, the violence increased across Northern Ireland, the Irish Republican Army membership grew, the tensions between the Irish and British escalated and the British government had direct rule of Northern Ireland after the Stormont government collapsed. It will also look at the debate that existed about the actions between both sides of the conflict, the marchers and the British Parachute Regiment. In addition, this exhibit analyzes the negative treatment Bernadette Devlin received from the press and her critics due to her gender.

-the Creggan area and William and Rossville Streets of Derry, Northern Ireland[1]

-the nationalists and NICRA protested internment, the act of arresting and detaining suspected members of illegal paramilitary groups without a trial[3]

Collapse of the Berlin Wall

A digital-humanities exhibit examining collapse of the Berlin Wall through primary resources, the social sciences, and historical thinking.

In five parts, the space place and time of East Berlin in the German Democratic Republic are explored to find the connection between protest, the Berlin Wall, and conception of the Berlin Wall's collapse today.

Protest Music at the March on Washington (1963)

On August 28, 1963 the March on Washington for Jobs and Freedom was held on the National Mall in Washington D.C., beginning at the Washington Monument and ending in front of the Lincoln Memorial. Some notable musical activists, such as Bob Dylan, Joan Baez, Odetta, the Freedom Singers, and Peter, Paul, and Mary, led the marchers in song. Together, with the 250,000 participants, they marched and sang protest songs, unified in their cause for civil rights. Songs such as "We Shall Overcome", which originated as an African-American Hymn and was adopted into the civil rights movement,[1] were used to create solidarity between the marchers as well as reinforcing the values of the cause to those who were not already aligned with the movement.[2] This exhibit explores the intersections of gender and race amongst protest musicians of the period and the ways in which the music preserved and promoted unity amongst the oppressed.

[2] Dunaway, “Music and Politics in the United States.” 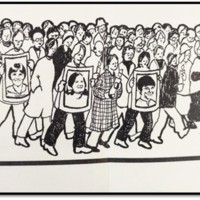