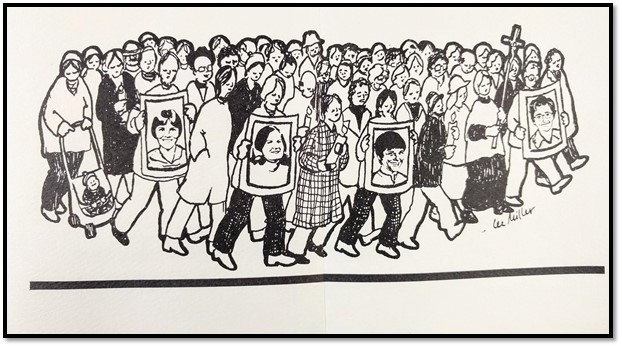 What compels an Ursuline nun to participate in more than a dozen protest events and purposefully trespass on government property?

The answer lies with the story of four women caught between the global frameworks of the Catholic Church, human rights, and Cold War politics: Catholic missioners Dorothy Kazel O.S.U., Jean Donovan, Ita Ford M.M., and Maura Clarke M.M..(1) On December 2, 1980 these four churchwomen were raped and murdered by members of the National Guard in El Salvador - guard members who were supplied with equipment and training by the United States government. Sister Dorothy Kazel and lay missioner Jean Donovan were part of the larger Cleveland Latin America Mission Team (CLAM). Their murders shocked and galvanized the Catholic community in Cleveland. Even today, Cleveland’s Catholic left embraces a strong tradition of activism against human rights abuses and the United States’ involvement in Latin America, including WHINSEC.

This exhibit is curated by Fall 2019 "Introduction to Historical Studies" students at Cleveland State University and edited by the instructor, Dr. Shelley Rose. It demonstrates the powerful potential of historical thinking skills to tell a local story with national and transnational resonance. Further, this exhibit contextualizes the Cleveland Latin American Mission Team's history, the murder of the four churchwomen, Cold War policy, and activism on Cleveland's religious left.

Geographically, this means investigating protest events in Cleveland, El Salvador, and beyond. Furthermore, historians and audience alike must carefully consider the politics of identity in this case study: while protest is an inherently political act, many of the Ursuline sisters and family members of the churchwomen would not self-identify with the term "activists."